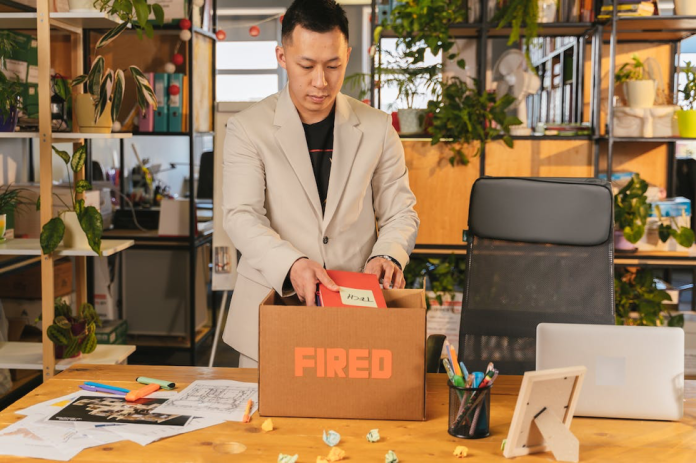 “You’re fired!” Nobody likes hearing these words, and they may even mess someone up badly. Thus, you can see how the terminology has changed in the 21st century, and employers use phrases such as “We’re letting you go,” “We don’t need your services,” and even “We’re promoting you to our customers today.” Organizations wish to find less humiliating ways to terminate someone’s employment. Find a graceful way to remove someone from your company if unsatisfied with their services. If an employee’s performance doesn’t improve, there’s always room for respectful termination. There are several reasons bosses now want to know how to fire someone without making them feel they’ve been wrongly terminated.

How to fire someone: legal grounds for firing an employee

Some 40% of Americans admit to being fired at some point. Moreover, many employers think it’s perfectly alright to fire someone without any reason because most employees are working in an organization “at will.” However, if workers believe they were unjustly dismissed, there’s always that much-feared wrongful termination lawsuit, as your lawyer might inform you. Elon Musk’s Twitter conquest recently led to massive layoffs in the USA and Europe. However, European employees are fighting back because labor laws are stricter there. Even Americans need legal reasons for firing:

How to fire someone: psychological effects of getting terminated

What happens when a person gets fired? You may have been an employee before becoming a proud business owner. You know how it feels – that embarrassment and disappointment – when your boss lets you go. Learning how to fire someone properly has become important for employers. Even though you can dismiss someone without notice, it isn’t an applaudable practice. Sometimes, workers can feel self-pity, depression, and insignificance after getting dismissed suddenly.

It’s heartbreaking for employees to get fired without undergoing a Performance Improvement Plan. For instance, a survey shows that 90% of workers complained about not being in on these plans before a manager fired them. So, learn how to let people go properly without creating a kerfuffle.

How To fire someone with compassion and decency?

Inform human resources:- Inform your HR department about the decision to fire someone. Remember that you’re not asking their permission; you’re the boss. You’re asking them to make all necessary arrangements and become your ally in this daunting process.

Prepare the paperwork:- Don’t drag your feet when dismissing an employee, and come to a meeting with them equipped with the proper paperwork. Your HR employees can gather all the necessary documents to show the legal grounds for terminating the employee.

Always be there:- The concept of “quiet firing” has become popular in which employers create unfavorable working conditions to make toxic workers disappear gradually. We don’t recommend it. It would be best if you told an employee to their face that you’re going to fire them. So, be there when they’re being terminated.

Keep it brief:- How to fire someone without causing them distress? Rip the bandage off, and don’t delay the process. Keep it brief, though, and polite as well. Just inform an employee it’s their last day at work.

Discuss past warnings:- Tell them they haven’t improved their performance despite all previous warnings. Explain to them how termination was the only solution you have after the employee’s neglectful and careless behavior. But don’t use mean words.

Show some compassion:- An integral part of knowing how to fire someone without hurting them is to show compassion. You have just read how termination affects people psychologically, so expect a reaction. You should show them some compassion and be helpful to them.

Listen but firmly:- Expect the worker to become tearful, defensive, or intimidating. It’s their right to plead their case before you, ask for “just one chance,” or threaten legal action in the future. However, you should listen to them firmly while repeating your decision. Please don’t reply to them discourteously and smartly diffuse their endeavors to escalate the solution.

Thank your employee:- In the end, it’s time to thank your worker for their services decently. Show them some recognition and tell them there aren’t any “hard feelings” from your side. A worker should ideally be dismissed on a Monday so they may start looking for another job. Wish them luck for a “bright future ahead” and ask them not to burn all their bridges.

What to say when firing someone?

Tell them, “We’re releasing you,” “We request your resignation,” “You’re better off working elsewhere,” or similar phrases.

What enrages a terminated employee?

Terminated employees often get angry when the layoff is abrupt, they get disrespected, or the dismissal isn’t friendly.

How to fire someone toxic without repercussions?

Follow the above-mentioned guidelines. Moreover, you must explain to them how their behavior affects others. Outline the problem as explicitly as you can without humiliating them.

How can I fight a wrongful termination lawsuit in the USA?

Hire a lawyer and prove that the fired worker’s claims are baseless.

By now, you’ve probably learned to fire someone from your organization as decently as possible. You show them some respect and refrain from messing them up while dismissing them from your employment. A business owner should only terminate someone’s employment on legal grounds, as specified above. But you can always fire someone without notice. Learn that firing someone rudely can mess them up, so you must be polite. Make HR your ally, schedule a meeting with that worker, document their ineptitude, give them the bad news without delay and be there when they’re fired. Remember, being fired isn’t easy on anyone, and you might have been in that seat at some point in your life.